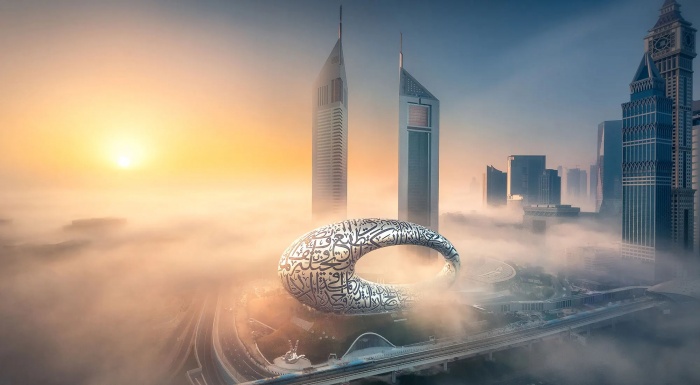 The Museum of the Future is preparing for its launch in Dubai, with guests from around the world expected to be in attendance.

The building is an “architectural and engineering marvel, confidently straddling the past and the future and applying advanced technology to traditional artforms,” according to authorities in the United Arab Emirates.

It also ‘speaks Arabic’ – the facade is a canvas for the poetry of sheikh Mohammed Bin Rashid Al Maktoum rendered in the calligraphy of Mattar bin Lahej.

The form is futuristic, with the building hoping to “open a new path away from the high-rise towers that dominate skylines everywhere,” especially in Dubai.

The development was conceived by Killa Design and is composed of over 1,000 individual fiberglass and stainless-steel exterior elements.

Inside guests can expect to find immersive future environments that merge science and technology.

Outside, the museum has a garden with 100 plant species reflecting the United Arab Emirates’ heritage and biodiversity.

Trees and plants, from ghaf and sidr, to palm and acacia trees, are all sprouting from the green plateau where the building stands.

A release ahead of the opening said: “The museum builds on the visionary culture that has transformed the United Arab Emirates’ into one of the most advanced nations in the world in less than 50-years.

“We are a showcase for the spirit of courage, optimism and innovation that propels Dubai forward.

“Like our home city, the museum is a place of tolerance, inviting varied cultural, philosophical, social and spiritual outlooks.

“Our goal is to provide light in dark times: in an age of anxiety and cynicism about the future, we are showing that things can and must progress.”

The Museum of the Future is an initiative from the Dubai Future Foundation.

The organisation was formed in 2016 by sheikh Mohammed bin Rashid Al Maktoum, prime minister of the United Arab Emirates and ruler of Dubai.

The museum claims it will be a gateway to a future world, crafted by visionary designers, artists and filmmakers.

It combines elements of exhibition, immersive theatre and themed attractions.

Each floor is like a film set from a future that guests can inhabit, explore and interact with.

Ticket prices start at AED145 per person, while children under three get in free.

Emirati citizens over the age of 60, people with disabilities and one accompanying caregiver will be free of charge.