Marking another milestone in its phased reopening, Disneyland Resort welcomes the return of three fan-favorite nighttime spectaculars: “Main Street Electrical Parade” and “Disneyland Forever” fireworks spectacular come home to Disneyland Park for a limited time, and “World of Color” resumes performances at Disney California Adventure Park. During this special presentation, the “Main Street Electrical Parade” is debuting an all-new grand finale for its 50th anniversary, celebrating the theme of togetherness. Plus, the popular nighttime show “Fantasmic!” will soon return to Disneyland Park on May 28.

“As we approach the one-year anniversary of the Disneyland Resort reopening April 30, we are thrilled to welcome back our beloved nighttime spectaculars and introduce all-new offerings that underscore our incredible momentum and set the stage for much more to come in the future,” said Disneyland Resort President Ken Potrock. 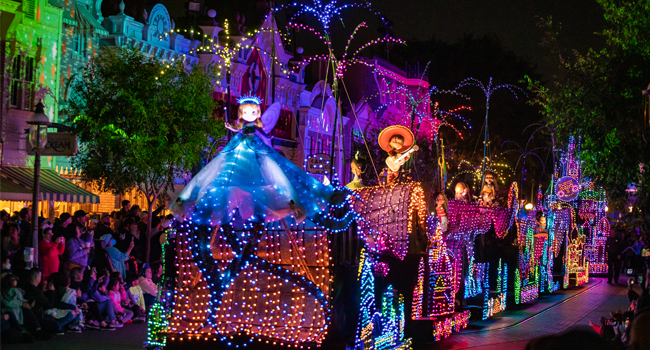 Over the past five decades, the “Main Street Electrical Parade” has brought generations of family and friends from around the world together to delight in its nighttime magic and imagination. Encapsulating that enduring appeal, Disney Live Entertainment is introducing an all-new, grand finale that celebrates 50 years of togetherness and continues the enchantment for a whole new generation of dreamers. This universal theme is reflected in the creative concept of the new finale sequence, and it continues the evolution of this cherished spectacular.

As it passes by, guests along the parade route see a different set of stories depicted on each side of the float, presenting stylized scenes from more than a dozen Walt Disney Animation Studios and Pixar Animation Studios films such as “Encanto,” “Frozen,” “The Jungle Book,” “Raya and the Last Dragon,” “Aladdin,” “Coco,” “Mulan,” “Brave,” “The Princess and the Frog” and more. 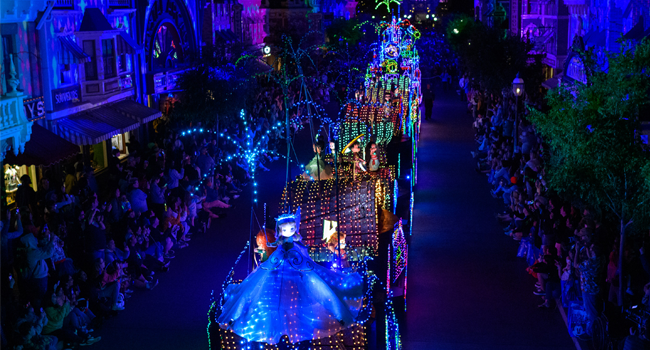 “World of Color” at Disney California Adventure brings animation to life with powerful fountains that create an immense screen of water. Combining music, fire, fog and laser effects with memorable animated sequences, “World of Color” floods the senses and immerses audiences in some favorite Disney and Pixar stories. 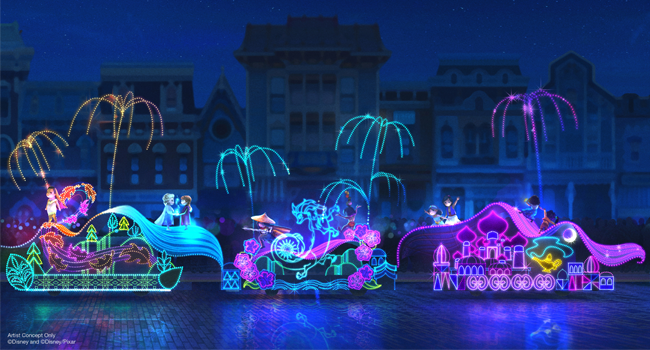 “Disneyland Forever” fireworks spectacular is filled with sparkling pyrotechnics and immersive projections that envelop guests in a breathtaking journey with surprising special effects. Audiences gathered on Main Street, U.S.A., in front of Sleeping Beauty Castle, near “it’s a small world,” around the Rivers of America and within sight of the Matterhorn will each have a different, exciting and immersive perspective of the show.

And celebrating its 30th anniversary, “Fantasmic!” – Disney’s longest-running nighttime spectacular – will once again illuminate the Rivers of America at Disneyland Park beginning May 28.

For all of the nighttime spectaculars, guests can check the latest schedules and show times at Disneyland.com and the Disneyland app.

Dining and shopping add to the enchantment

For a magical meal and entertainment experience, guests may choose to book special dining packages or a dessert party, which include access to a reserved viewing area for a select spectacular. Guests can visit Disneyland.com to learn more and book reservations.***

For a limited time, carts and select dining locations will offer imaginative treats and eye-catching novelties honoring the “Main Street Electrical Parade,” such as the parade macaron at the Jolly Holiday Bakery Café, two special churro flavors, celebratory popcorn mixes and more. Available at various locations in Disneyland while supplies last throughout the summer season, guests can snack in electrifying style with the all-new light-up Elliott dragon premium bucket and light-up turtle premium sipper. Limit two per item per guest and availability may vary throughout the summer season.

Guests can also take the magic home with an exciting merchandise collection, available at Disneyland Resort and shopDisney, commemorating the 50th anniversary of the “Main Street Electrical Parade.” The assortment includes a themed ear headband, apparel and more.

The return of these beloved nighttime spectaculars, as well as fan-favorite experiences like traditional character greetings, marks another significant milestone that continues the incredible momentum in the phased reopening of the Disneyland Resort.