The latest data from ForwardKeys reveals that the Russian invasion of Ukraine has caused an immediate stall in flight bookings to Europe and within Russia domestically.

In its second public analysis since the outbreak of war, ForwardKeys compared flight bookings in the week following the invasion, February 24th-March 2nd, to the previous seven days.

Excluding Ukraine and Moldova, which closed their air space, and Russia and Belarus, which were subjected to flight bans and safety warnings, the destinations worst affected were generally those closest to the conflict.

All the other European countries, except for Belgium, Iceland, and Serbia, which saw single digit drops, experienced a decline in bookings between ten and 30 per cent. 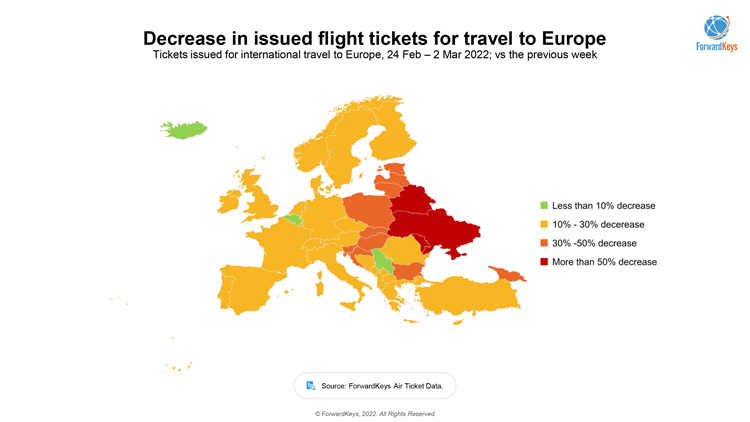 Flight bookings within Europe fell 23 per cent, whereas they fell 13 per cent from the USA. 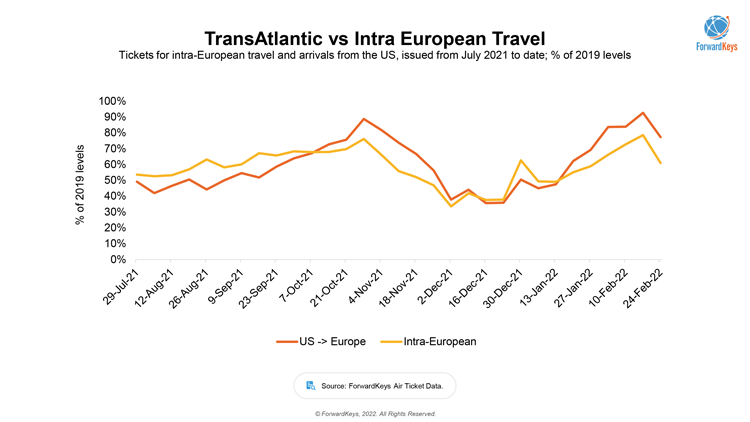 The only European air corridor left open to Russia is via Serbia, which is now acting as a gateway.

This is most clearly demonstrated by an immediate uplift in seat capacity between Russia and Serbia in March and by the profile of bookings.

Seat capacity scheduled in the first week of March shows around 50 per cent increase in available seats for flights from Russia to Serbia, compared to February 21st (before full scale military operations began).

Some 60 per cent more flight tickets were issued for travel from Russia to another destination via Serbia in the week immediately after the invasion, than there were in the whole of January.

Also, in January, 85 per cent of transfers from Russia via Serbia were to Montenegro; in the week after the invasion, the figure was 40 per cent, as Serbia became a hub for onward travel to Cyprus, France, Switzerland, Italy and elsewhere. 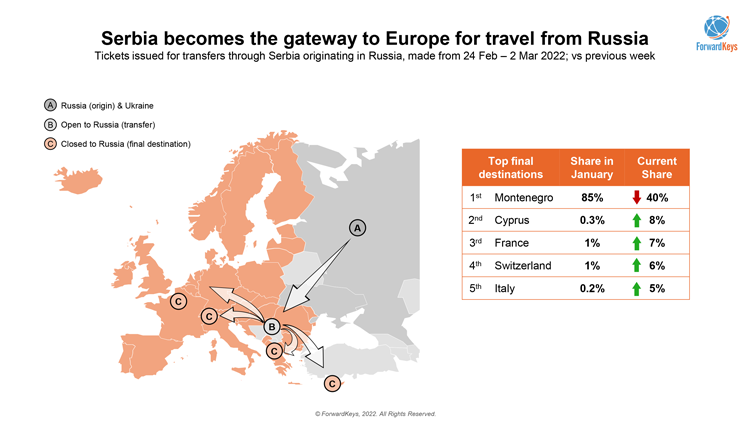 Olivier Ponti, vice president, insights, ForwardKeys, said: “Russia’s invasion of Ukraine has made an immediate impact, stalling what had been a strong recovery in travel since early January.

“What I find surprising is that transatlantic travel and western European destinations have been less badly affected than I feared – North Americans can tell the difference between war in Ukraine and war in Europe, and so far, it seems that travellers regard the rest of Europe as relatively safe.

“There is also a strong pent-up demand.

“What’s most notable is the speed with which Serbia has become the gateway for travel between Russia and Europe.

“However, these are early days in a global political and economic crisis; so, what happens to travel will certainly be affected by the progress of the war and the impact of sanctions.

“Over the coming weeks, I expect we will see inflation and possible fuel supply issues pulling back what would otherwise be a strong post-pandemic recovery, as Covid-19 travel restrictions are progressively lifted.”