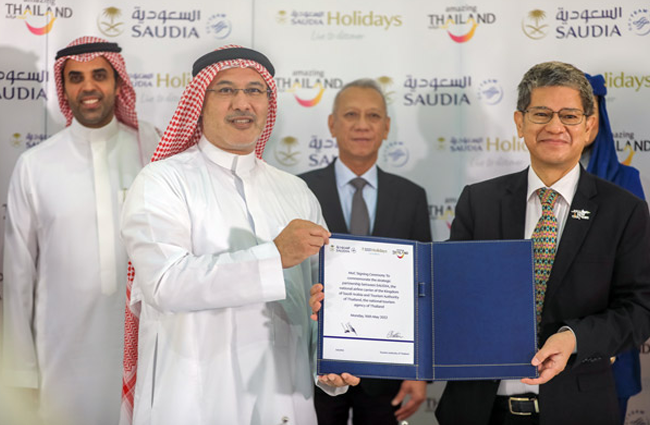 SAUDIA, the national flag carrier of Saudi Arabia, has signed a Memorandum of Cooperation (MoC) with the Tourism Authority of Thailand (TAT). This agreement will pave the way for future joint ventures and collaborations to further enhance tourism marketing and promotion efforts between the two nations through the airline’s SAUDIA Holidays platform.

According to the terms of the MoC, SAUDIA will organize promotional campaigns for various hotels and tourist attractions in Thailand through the platform – www.holidaysbysaudia.com and its mobile application. The airline will also create a comprehensive range of travel packages to suit the budgets of all SAUDIA guests looking to visit Thailand’s top destinations.

Mr. Majed Al-Harbi, Manager of Saudia Holidays, said that SAUDIA has once again demonstrated its commitment to expanding its scope of international multi-sector partnerships. This will result in increased interest and subsequent investment in the airline’s tourism promotion platform, which helps guests from every budget-range plan their next trip.

Earlier in February of this year, SAUDIA announced that it would be running three flights a week between the Kingdom and Thailand as the two nations bolster their bilateral relations. The new flight route comes as part of SAUDIA’s overarching efforts to broaden its international network of routes that span across four continents.

Mr. Chattan stressed the importance of this MoC, which was signed soon after direct flights between the two countries had been launched, and will aid each nation’s efforts to promote Thailand as a preferred travel destination.

He added that both parties had set clear joint marketing goals to help empower Saudi Arabia and the Middle East’s tourism sector (one of Thailand’s major target markets), through the latter country’s tourism expertise.

SAUDIA Holidays is one of many SAUDIA’s travel incentive programs that help guests plan their vacations easily and efficiently. Through its advanced online platform, SAUDIA guests can find competitive rates to suit every budget, along with hotel booking, car rental, and vacation tour packages.